Tokyo Midtown is a 569,000-square-meter mixed-use development in Akasaka, Tokyo, Japan. Completed in March 2007, the $3 billion (¥370 billion) project includes office, residential, commercial, hotel, and leisure space, and the new quarters of the Suntory Museum of Art. When completed, the Midtown Tower was the tallest building in Tokyo.
The project site takes up 78,000 square meters (19.4 acres) previously occupied by the Japan Defense Agency in Roppongi area of Minato, along Gaien Higashi and close to Roppongi Station, and less than a kilometer (half a mile) from the similarly scaled Roppongi Hills complex. 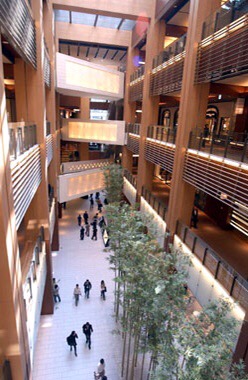 The primary developer is Mitsui Fudosan, working in concert with several partners. The project was designed by architectural firm Skidmore, Owings & Merrill;[1] Nikken Sekkei is the local architect of record. Landscape architecture of the surrounding new 40,000 m² (10 acre) public park was designed by EDAW, the Suntory Museum of Art designed by Kengo Kuma, and the design of the retail Galleria handled by the Colorado-based CommArts.